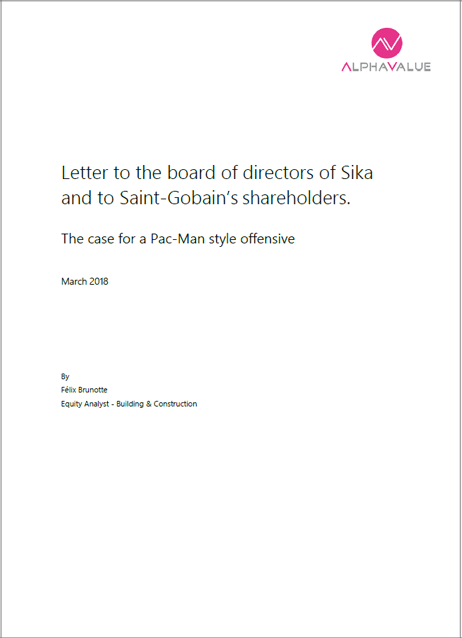 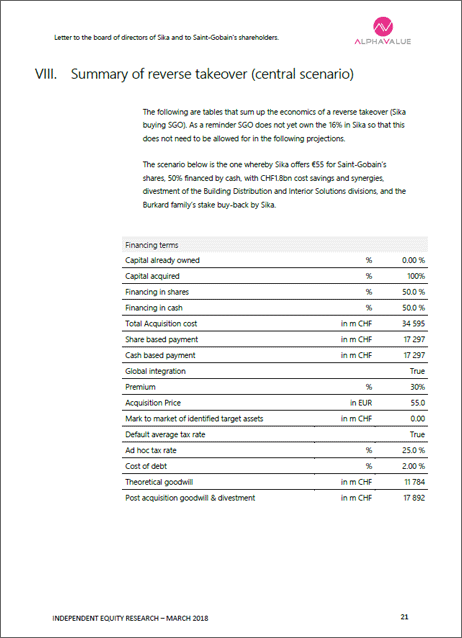 SAINT-GOBAIN / SIKA
The case for a Pac-Man style offensive

Letter to the board of directors of Sika and to Saint-Gobain’s shareholders.

It is clear that Sika is a better firm than Saint-Gobain (SGO). The invisible hand has been saying so ever since SGO tried in December 2014 to garner control of Sika by purchasing the voting rights held by the controlling Burkard family.

The now three-year old legal standoff has had no impact on Sika’s operations and has made clear that Sika does not need SGO. This is a strong test of competence.

Our opinion is that Sika’s management could do an even better job by taking over SGO and paring the fat.

We believe that Sika can offer a 20%+ premium on a SGO share price below €45, namely an offer priced of €55. A 50% debt financed transaction would not put Sika’s balance sheet at risk.

We conclude in the following review that a Sika bid on SGO would thus warrant a 20% uplift on SGO, while the upside potential on Sika’s target price could be a remarkable 85% (i.e. a CHF13,500).

I. The operating rationale

III. The ideal route to execute a Sika led merger

VI. Due diligence items
Asbestos in France
On pension provisions

VII. The difficulties ahead of a reverse takeover
Burkard family
Saint-Gobain’s employees
The French government
The regulators